It’s 4am in Chicago and I’m sitting in my living room drinking coffee, waiting for the phone to ring. On the other side of the globe it’s 10am and Chrissie Wellington, the reigning queen of Ironman is sitting with her Manager Ben calling me.

What was supossed to be a video Skype interview is now a phone call due to some IT issues.

“It’s quite early there, you can’t be doing this just for me! You must either have a child or a serious triathlon problem!” 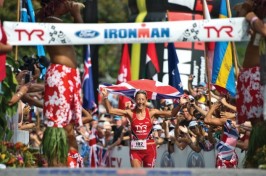 CW: This win was the most gratifying. The time was really irrelevant. All I wanted to do was finish the race feeling physically and mentally exhausted.

Two weeks before the Ironman World Championships, Chrissie had an accident on a training ride and was seriously injured.

Given the accident this year and the illness that kept you from starting the race in 2010, how important was it for you to start this time?

CW: If I would have started last year [2010] I wouldn’t have raced this year. After the accident the hospital said I needed skin grafts. I also tore a pectoral muscle. I really shouldn’t have been on that start line.

The swim was 6 or 7 minutes down from what I wanted. I would have been OK with 2nd, 3rd or even 4th place. I was going to give it everything, nothing but a win would really satisfy because I have a fear of losing.

I find it funny that you say you have a fear of losing because when we see you on the broadcast of Ironman for example, you always have a smile on your face.

CW: I feel very blessed to have the opportunity to do this. Some of that smile is pain, some if for my competitors and that’s important. Racing has given me an amazing platform and that’s why I do the sport. It’s not just a race numbers [times] are unimportant to me.

What does your race schedule look like for next season? Is there a chance we catch you at any of the Chicago area races like Madison or Racine?

CW: I’m not sure about my races yet. We haven’t set a solid schedule but I’ll probably post it in the next week.

The day after I talked to Chrissie, her manager released a statement saying she was not going to be racing in the 2012 season.

How did you come to the decision to take this year off from Triathlon?

CW: Making the decision to have a sabbatical was reminiscent of the time in 2006 when I was deliberating whether or not to embark on an unknown path as a pro triathlete. Although having such choices is a blessing making these decisions is never easy: but now, as then, I simply try to follow my gut instinct and do what I feel is right deep in my heart. But yes, it was a HUGE decision, and one that I deliberated long and hard over. I believe that racing cannot always be the axis around which my life revolves. It should not be an end in itself – never the be all and end all of my life. Never defining me. It is just one branch on a tree that I hope is as big, rich and varied as I can possibly make it. I want to inject some variety back into my life, some balance, and some spontaneity. I want to be freer to explore and seize other opportunities. I have also realized that I need to take the time to truly truly cherish what I have achieved in this sport and actually appreciate ‘what is’.

I saw on Twitter that you have a title for your book.

CW: I did, it’s called A Life Without Limits, I’m very proud and passionate about it. It’s not “Chrissie’s Training Bible”, It’s really an autobiography, I talk about growing up, my background and some body image issues I went through that I think other people can learn from.

So not that your life isn’t going to revolve around training, how do you plan to fill your time?

CW: I want to focus on promoting the autobiography in the first part of this year. I invested so much time in writing it, and effectively promoting its messages will take just as much time and energy. I also want to spend more time with family and friends, read more widely, go to concerts and generally inject some variety and balance back into my life. I want to attend different races around the world, to work with my sponsors, to be able to attend the Olympics (not to compete!), to get involved in new projects, such as the recently launched motivation and training downloads I made with Audiofuel. My desire to work a lot more actively with all of my chosen charities was also a reason for stepping back from full time training and racing for a little while. This work includes organizing specific events, such as the ‘Runs with Chrissie’. We have already held two, and they have proved hugely successful and have raised over £10,000 for the Appeal. This Friday (2 March) I will also be announcing a big endurance challenge that I will be doing for the Appeal. 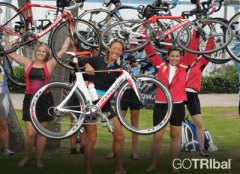 Chrissie told me she plans to do work with the Blazeman Foundation for ALS, Girls Education Nepal and Challenged AthletesFoundation and well as helping to grow the women’s empowerment network, GOTRIbal.

She’ll also be attending some clinics for the Challenged Athletes Foundation and is doing a ride on March 11th to raise awareness for the organization.

Thanks to Chrissie for taking time out of her day to talk to us. We wish her luck this year with all her new projects. Chrissie’s book, “A Life Without Limits” is available in the US on May 15th.

2 thoughts on “Going Pro: A quick chat with Chrissie Wellington”