I’d like to introduce you to my buddy Beefy (on the left).

Beef is the reason I started training for a marathon, I went on one of his training runs for the 2009 Chicago Marathon. I (barley) made it 6.5 miles that day, but it hooked me on running. 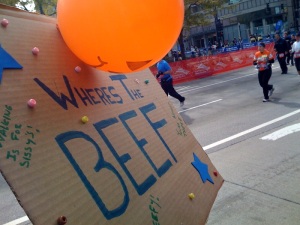 I went out to watch Beef run the Marathon that year and saw how excited all the finishers were, it was amazing.

A few weeks later Beef and I were sitting in my condo, watching the bear and drinking some Abita when he said “You should run the Marathon with me next year.”

I said “OK” and started training for the 2010 Chicago Marathon.

I was one of the most fun run’s I ever had, and it got me hooked on endurance sports. The next year I did an Ironman 70.3, then the 2o11 Chicago Marathon and for 2012 I’m doing TWO 70.3’s and I’m registered for Ironman Wisconsin. It’s my first attempt at the full Iron distance.

One of my prep races will be the Bigfoot Triathlon in Lake Geneva on June 24th. I sent Beef a Facebook message today saying he should do it with me.

Let’s just say he didn’t jump at the idea. But he didn’t say no.

I know that he IS interested in doing a Tri. He bought a bike last year, he already has running experience, and I know he can swim at least a little (we used to be Lifeguards together).

So I’m going for the peer pressure approach. I would probably never be doing this if I didn’t run with Beef. Help me get Beef to race the Bigfoot Triathlon this year!

Leave a comment below and let’s get this guy racing!

3 thoughts on “Where’s the Beef? – A Peer Pressure Blog”