In my most recent race report I mentioned how the frame of my bike came home cracked in 2 places thanks to the negligence of Southwest Airlines and TSA.

I know I probably shouldn’t be surprised, but apparently neither company will take any responsibility for the handling & damage of the bike.

Southwest claims that since the bike case itself wasn’t broken, then then they can’t be responsible for what’s inside. They attempted to back up their claim by saying that is was TSA who opened the box, not Southwest.

But who did I turn the box over to when checking in? And who charged me a $75 fee to travel with the case? I understand the fault doesn’t rely solely on Southwest, but you can’t honestly tell me no have NO responsibility.

Unfortunately they most communication I’ve had with either company has been through Twitter. Here is my exchange with Southwest. 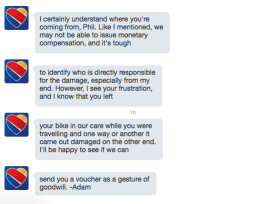 Thanks, but a voucher will not replace this bike.

I’ve also been trying to deal with TSA. The phone number I was given on the inspection notice they left in the bike box won’t get you to a live person. Instead callers are directed through a series of “informational” recordings. The only option was to file a very lengthy and tedious claim form and submit it via mail, fax or email.

Once sent, the end result is that someone might get back to you in the next 30 days. (Southwest had a similar 30 day response time).

That amount of lag time seems excessive. I guess 30 days would be ok if they had lost my luggage containing my favorite pair of jeans, cause odds are I have other pants. Unfortunately I only have one bike I can train for and race triathlons on. So I’m up shit creek, with three more races scheduled.

I did also tweet the TSA, which is the only reason I’ve gotten any information from them. Their response based on one photo they saw on twitter was that it appeared the damage was done in transit, therefore they were not responsible. Here is my exchange with TSA:

In reality what happened was that Southwest took the box, TSA intercepted, opened and inspected. But when the repacked they box they just shoved all the parts in the box and tightened them down causing the frame to crack.

Who is responsible for this?